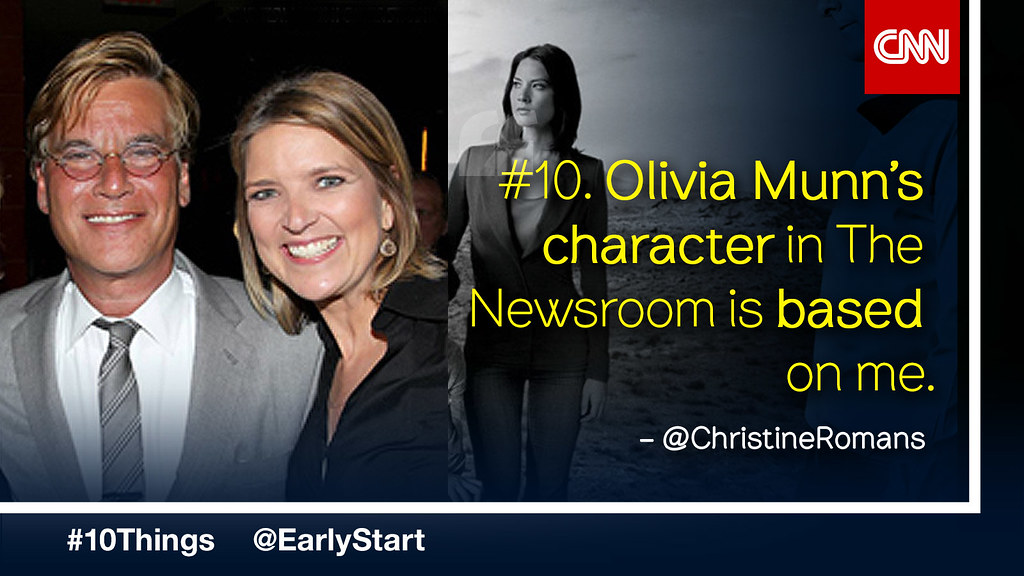 Christine Romans is one busy lady! She co-anchors "Early Start" with John Berman weekdays at 4am ET, she is CNN's chief business correspondent and the host of "Your Money," CNN's Saturday business program airing at 9:30am ET.

Here, Christine shares 10 things you probably don't know about her:

1. I have been getting up before 3 am for five years

2. I feel like I have had jetlag for five years

3. My first job in business journalism was covering pork belly and hog futures

8. I have covered 4 presidential elections at CNN

9. I learned how to speed read in sixth grade

10. Olivia Munn’s character in The Newsroom is based on me

Got a money-related question? Want some [very] early morning tweets in your feed? Connect with Christine!

For 10 things you probably don't know about our other morning anchors, visit New Day's page.

The GOP: We Told You So

A big "we told you so" this morning from the GOP.

With more and more Americans getting dropped by their insurance carriers because of Obamacare, Republicans have been quick to point out they predicted this exact scenario back in 2010, when the President was making a lot of promises that haven't exactly panned out, CNN's Chief Congressional Correspondent Dana Bash reports.

While handcuffed and shackled, Joseph Jenkins and Charles Walker said little during their first court appearance after being arrested. For the two convicted killers, their manhunt ended just 80 miles from where their escape began, CNN's Nick Valencia reports.

Officials tell CNN the two were waiting for a ride from Atlanta in a Panama City Beach motel when they were busted unarmed. They were detained without incident.

At a press conference on Sunday, Florida officials addressed the bureaucratic blunder. The two convicts serving life sentences were accidentally released after showing forged paperwork. It also turns out that apparently this has happened twice before, only the inmates were caught before they got out.

Law enforcement has launched an investigation to figure out how Jenkins and Walker duped the system and obtained the fake documents.

"... there is speculation, and underline speculation, that there was a source where for a certain sum money documents could be constructed for eight thousand dollars, whether that is true or not, is will be determined," says Jerry Bailey, Florida Department of Law Enforcement Commissioner.

Many believe it was an inside job. CNN legal analyst Mark O'Mara says they must have had help.

"It has to be somebody on the inside. It just has to be. Somebody at the clerk's office, somebody in the courthouse, maybe even somebody in a state attorney's office position, a secretary maybe who can actually get that paperwork done," he says.

Police are now promising to hold all who contributed accountable, telling CNN that additional arrests are expected.

Snowden Breaks His Silence to the NYTimes

NSA leaker Edward Snowden is asking you to trust him. He says there is zero chance Russia or China has any of his top-secret files. Of course he is presently in Russian and wanted in the US on espionage. Can you take him at his word?

WATCH ABOVE VIDEO AND RESPOND BELOW.

The Government Shutdown is Over... Now What?

Listening to President Obama chatting with the Italian Prime Minister, it sounded as if he was ready for a vacation in Tuscany, CNN's Jim Acosta reports.

But the President has no room on his plate for pasta, not when he's set his sights on passing a new budget, immigration reform, and even a farm bill... in less than 90 days.

It is a task the president may have made more difficult for himself after railing against the Tea Party over the shutdown. However, he may get help from Senate minority leader Mitch McConnell who told the Hill newspaper that "there will not be a government shutdown... I think we have fully now acquainted our new members with what a losing strategy that is."

The President could also have a fight on his hands over his next pick for Secretary of Homeland Security. Jeh Johnson, a former military lawyer and Obama campaign fundraiser, said at a conference earlier this year that the day will come when the US must declare the war against Al Qaeda over.

And that's not all. The administration still has to fix those health care website glitches...

With House Republicans setting a vote for today on a temporary spending bill that would de-fund Obamacare, Congress edges closer to a government shutdown.

Now just 10 days to go before a government shutdown – and a possible debt default not far behind – White House officials says President Obama is ready to engage with leaders on Capital Hill in the hopes of averting a nightmare, CNN's Jim Acosta reports.

As the community begins to heal after Monday's shooting, new details are emerging that paint a picture of the damage left behind inside Building 197. As investigators sift through the evidence in the Navy Yard killings, Navy officials say damage inside Building 197 is so extensive, it may take weeks to repair and reopen in, CNN's Pamela Brown reports.

Law enforcement sources say nothing points to a specific motive for the rampage, even after the seizure of Aaron Alexis' computer and other possessions, as well as interviews with his social contacts.

And odd details are emerging. For example, a federal enforcement source tells CNN that Alexis made unexplained etchings into the shotgun he used in the attack.

Also, new details have emerged suggesting authorities might have been able to contain the gunman more quickly. A government official tells CNN, when the first radio call came in about a shooting at the Navy Yard, highly-trained, tactical capital police officers  were told by a watch commander to stand down.

The Capital police chief has ordered an "independent fact review" of their response in the critical first moments after the shooting was reported.

The medical examiner's office was expecting to complete its autopsy of Aaron Alexis late last night. No information about any toxicology results will be released until next of kin are notified.

Teen Dies After Being Tasered

Israel Hernandez' family is devastated. They left Columbia hoping to live in a safer country, but now one of their loved ones is dead and the family is asking for justice, CNN's Adriana Hauser reports.

According to a Miami Dad police report, 18-year-old Hernandez was chased by officers around 5am Tuesday after he was seen spray-painting graffiti on private property. Police say he disobeyed commands to stop and the agents used a taser on him.

Shortly after, the report says, the teen's physical condition showed signs of stress. He was taken to a local hospital, and was later pronounced dead. Police say the use of a taser gun should not be fatal.

Israel's sister Offir Hernandez says that her brother was perfectly healthy and his case proves that argument wrong.

"It was very unnecessary and they went beyond the point, she says. "I don't know what exactly happened, but he died. They obviously went off the point."

CNN contacted the police for comments about Souza's account of what happened, but have not yet heard back.

But Miami Beach Police Chief Ray Martinez told the Miami Herald that when the officers cornered Hernandez, the teen ran at them. He said: "The officers were forced to use the Taser to avoid a physical incident."

This morning, more sightings and more concern about the fate of 16 year old Hannah Anderson in the hands of her alleged abductor James DiMaggio, CNN's Miguel Marquez reports.

There have been dozens of sightings of the dark blue Nissan Versa outside of California, with Amber alerts now lighting up much of the western US. At this Seattle emergency call center 9 out of 10 calls related to Hannah Anderson

Investigators are saying DiMaggio may have built his own explosives, ditching his car and wiring it to explode.

"If you see this car, do not approach it, but call law enforcement," says Jan Caldwell, San Diego County Sheriff's Department.

This as the human toll is taking it's effect. Sara and Ralph Britt – mother and step father of Christina Anderson and grandparents to Hannah and Ethan- spoke exclusively to CNN.

"Let her come back," says Ralph.

They believe that Hannah is alive. They hold out hope 8-year-old Ethan is alive as well, but they fear the worst.

Frosty Relations Between the US & Russia

"This is certainly a significant turn," CNN's Phil Black reports. "The key trigger for calling off this meeting is that name we've come to know so well, Edward Snowden, and Russia's decision to grant him temporary political asylum."

But it is by no means the only issue at stake. This is really the culmination in a long, steady decline in the relations between these two countries. This is partly because of some big disagreements and a lack of progress on big international issues like Syria, missile defense, nuclear disarmament and also domestic Russian politics in the United States.