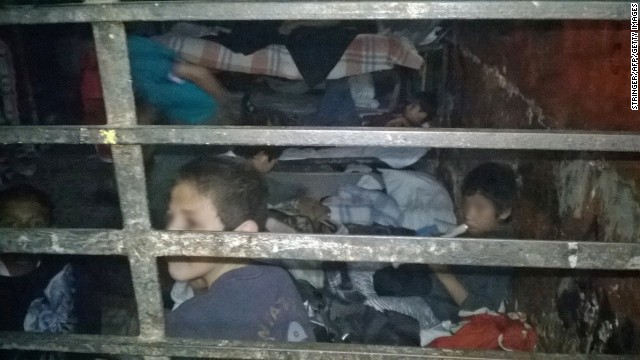 Sixteen-year-old Hannah Anderson made her first public appearance since her dramatic rescue from kidnapping and murder suspect James DiMaggio.

The teenage girl was kidnapped and taken on a thousand-mile journey, before the FBI shot and killed her alleged abductor, and saved her life on Saturday.

Her “arrival at a fundraiser for her family came as a surprise to her relatives and friends,” reports CNN’s Casey Wian.

"This night was an unexpected reunion honestly,” her cousin Brandon Fambrough says. “All her friends were here… It was like we haven't skipped a beat."

The fundraiser was held at Boll Weevil Restaurant in Lakeside, California. The media was invited but not allowed inside during Hannah’s reunion.

Raffle ticket sales, cash donations and 20 percent of the restaurant's sales were all donated to the Anderson family, partly for Hannah's mother and brother's funeral.

“I wanted to say thank you all for coming,” Anderson said. “The community came together, putting on a great fund-raiser for Hannah, and hopefully her future and healing.”

Should 3-Yr.-Old be with Biological Father or Adoptive Parents?

A resolution maybe in the works for a bitter custody battle over a three-year-old that has spread from Oklahoma to South Carolina and back again.

Melanie and Matt Capobianco adopted and raised baby Veronica for two years, before losing her over in a bitter custody dispute. Wednesday, they arrived in Oklahoma to try to regain custody.

"As soon as we arrived, we requested a visit with our daughter,” Melanie Capobianco said. “As a mother, my heart broke when our request was denied.”

"It's time for this to be over,” Matt Capobianco said. “With each passing day we lose another day with our daughter.”

He was awarded custody in December 2011, but the case didn’t end there.

The U.S. Supreme Court ruled in favor of the Capobiancos and South Carolina ordered the baby be handed back to them.

Even Oklahoma Governor Mary Fallin weighed in via Twitter Wednesday, saying “Mr. and Mrs. Capobianco deserve an opportunity to meet with their adopted daughter.”

Another tweet read, “They also deserve the chance to meet with Mr. Brown and put an end to this conflict."After failing to show up to a court appearance Monday, Brown turned himself in to Oklahoma authorities.

“He was freed on $10,000 bond, but he still faces an extradition order to South Carolina,” Sambolin reports, “an order the Oklahoma governor promises to expedite if Brown fails to cooperate.”

Brown’s attorney told CNN, at his client’s request, and Governor Fallin's suggestion, that he reached to the Capobiancos’ representative to discuss a resolution with in the best interest of baby Veronica, including an offer to meet personally with the adoptive parents.

An 18-month-old Ohio girl has been missing for nearly two weeks now. This morning, her mother is behind bars and charged in the little girl's disappearance.

CNN's Pamela Brown has the story.

Those lungs that came from an adult donor, made possible when the age restrictions for transplants were lifted this week, but only for one year.