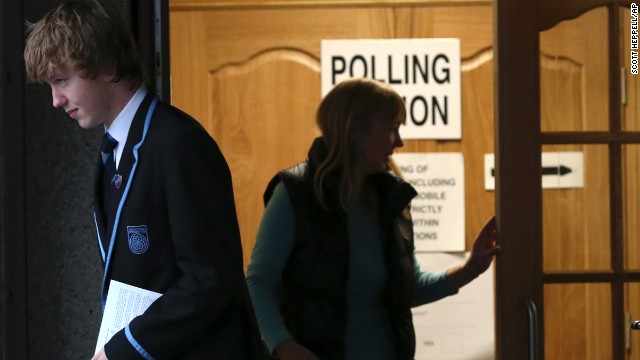 Scotland Goes to the Polls

Scotland's voters are heading to the polls Thursday to cast their ballots in the country's landmark independence referendum.

There, they will face a straightforward yes/no question: Should Scotland be an independent country?

More than 4.2 million people have registered to vote, the largest electorate ever in Scotland, and turnout in the referendum is expected to be high.

A vote for independence would mean Scotland, with its population of about 5.3 million, splits from the rest of the United Kingdom, made up of England, Wales and Northern Ireland.

Voting can take place from 7 a.m. until 10 p.m. local time (2 a.m. to 5 p.m. ET) at more than 5,500 polling stations across 32 districts nationwide, from the remote highlands and islands to the big cities of Edinburgh and Glasgow.

Voting was brisk at one polling station in Glasgow as the polls opened, with many people voting on the way to work or before taking their children to school.

Results from the different areas will come in overnight into Friday morning local time, with Chief Counting Officer Mary Pitcaithly expected to announce the outcome "around breakfast time."

Bad weather or the sheer volume of votes cast could slow down the counting process. However, the weather forecast appears good so far - important when some ballot boxes must be collected by helicopter, plane or boat from polling stations on distant islands.