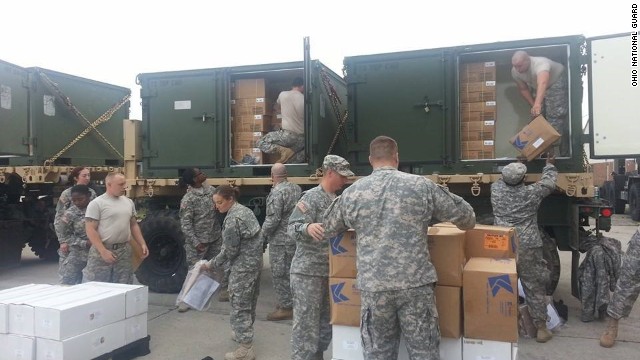 Residents of Ohio's fourth-largest city will have to wait a little longer to use their tap water.

Instead of isolating the two neighborhoods, the Mayor said he'll keep the ban on drinking or using tap water in the entire city of Toledo until additional retests are completed. He declined to provide specifics on the name of neighborhoods in question and how high the toxin levels are.

"A majority of areas are satisfactory, but we have two areas of concern," he said at a news conference.

As many as 400,000 people were told not to consume, cook with or boil the tap water after a toxin called microcystin was found in the water supply Friday. Collins told reporters the advisories will remain in effect until further notice

Toledo's drinking water comes from Lake Erie, where a harmful algae bloom that causes microcystin has been growing.

The city has set up distribution centers for potable water, where members of the Ohio National Guard, fire officials and other first responders are giving out safe water.

About 350 Ohio National Guardsmen have been activated by the governor, according to a U.S. Defense Department official, adding that they have set up three Reverse Osmosis Water Purification Unit sites at two high schools and a police facility. The guardsmen have also delivered ready-to-eat meals, the official said.