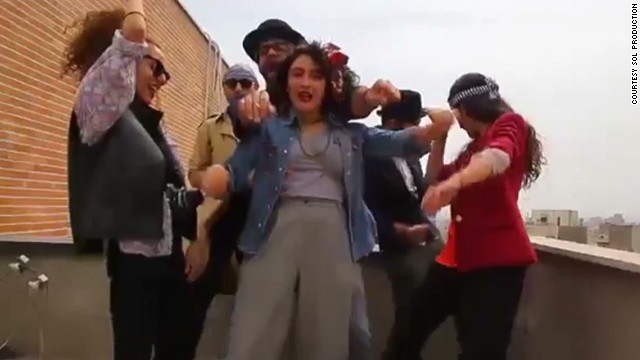 ix people who were arrested in Iran for dancing in a YouTube video to Pharrell Williams' song "Happy" have been freed, the International Campaign for Human Rights in Iran said Wednesday, citing a source close to the families.

The director of the video was not released, the group said.

One of the six announced that she was freed. "Hi I'm back," Reihane Taravati wrote on her Instagram account, thanking Williams and "everyone who cared about us."

The fan video is one of many to the hit song that has sold millions of downloads worldwide.

Tehran Police Chief Hossein Sajedinia ordered the arrests of the three men and three women for helping make an "obscene video clip that offended the public morals and was released in cyberspace," the Iranian Students' News Agency reported Wednesday. Authorities forced the young people to repent on state TV.

Iranian President Hassan Rouhani seemed to think differently. "#Happiness is our people's right. We shouldn't be too hard on behaviors caused by joy," a tweet on his account said. It seemed to be quoting one of his comments from June 2013.

"It is beyond sad that these kids were arrested for trying to spread happiness," the Grammy Award winner said on his Facebook page.

Just like in the singer's original video, the Iranian fan version features a montage of men and women dancing to the song in a variety of settings.

Taravati gushed over the reaction to the video in the days before the Tuesday arrests.

"178K VIEWS thank you," she wrote on her Facebook page last week. She also posted a picture of people featured in the video on Instagram.

"People of Tehran are happy! Watch and Share Our Happiness!," Taravati wrote. "Let the world hear us! we are happy and we deserve to be!"

9:49 pm ET February 6, 2023 RETWEET
When @AlisynCamerota asks me to come on her TV show, I always say, “It would be my honor!”* *(After asking “whtwitter.com/i/web/status/1…StjYmty0
Johnberman

6:25 pm ET February 2, 2023 RETWEET
Nimble? I prefer “lithe.” Though it should be noted that in George Orwell’s essay, “Shooting an Elephant,”twitter.com/i/web/status/1…o/BIHlaAGPLi
Johnberman

6:40 pm ET February 1, 2023 RETWEET
Happy Birthday to the Pride of Iowa, @ChristineRomans! It is nice to do TV with genuinely brilliant/nice/corny people.
Johnberman

8:09 am ET January 31, 2023 RETWEET
Been waiting for this. EXCELLENT! twitter.com/SoxProspects/s…
Johnberman

4:45 pm ET January 30, 2023 RETWEET
I will be on TV tonight. Someone might get in trouble for this. instagram.com/p/Cn5d1msrfw2/…
Johnberman