RedState.com's Editor-in-Chief, Erick Erickson, thinks 'it's foolish' to expect a resolution from Congress by end of year

Just 33 days remain until the United States falls off the fiscal cliff. As politicians in Washington continue to hash out their plans to prevent it, Treasury Secretary Tim Geithner heads to Capitol Hill for separate meetings with Congressional leaders today. Both President Obama and House Speaker John Boehner made optimistic predictions yesterday, but it still remains to be seen how much each side is willing to give to reach a compromise. Erick Erickson, a CNN Contributor and the Editor-in-Chief of RedState.com, offers his view live on “Early Start” this morning.

Erickson says Congress should not rush to reach a deal before the January 1 deadline. "I think  it’s really foolish for anybody out there to think that Congress is going to be able to come to some sort of resolution," he says. "Congress is the one that designed the fiscal cliff.” He says Congress is now "scrambling" for a deal and new members are coming in after the election, "so, why not wait until the first of the year?" Erickson suggests. "Move the marker."

Racecar driver Danica Patrick shares with us the best advice she ever received.

Thirty four days remain until the United States falls off the fiscal cliff. Leaders in Congress are working toward a deal as the January 1 deadline edges in, but Democrats and Republicans are still at odds on their plans. Rep. Diane Black is a Republican from Tennessee. She's also a member of the Budget Commmittee and weighs in on “Early Start” this morning.

President Obama met with 15 small business owners at the White House to discuss the fiscal cliff yesterday. Lisa Goodbee is the President of Goodbee & Associates, Inc., an engineering firm in Colorado. Goosbie was one of the 15 to meet with Obama. A member of the Small Business Majority Network Council, Goosbie joins “Early Start” live from WashingtonD.C. to talk about the meeting,

Ambassador Susan Rice faced three Republican senators yesterday to explain her side of the story after they criticized her for comments on Sunday talk shows regarding the attack on the U.S. Consulate in Benghazi. She had suggested the attack was sparked by spontaneous protests in her September 16 interviews, and revealed yesterday that she was using unclassified talking points that excluded information linking the attack to al Qaeda. The GOP senators had only harsher criticisms of Rice after her meeting with them. CNN’s Dana Bash has the details.

Tensions are high in Washington as the January 1st fiscal cliff deadline nears.Politicians on both sides of the aisle have publicly shared willingness to compromise, but no deal is yet in sight.

A senior Democratic aide told CNN that talks haven't been productive, but they're still in the early stages, while GOP aides are only saying that talks are continuing. The White House said yesterday that the president is reaching out to leaders on both side of the aisle to touch base.

Congresswoman Maxine Waters is a Democrat from California. She joins Deborah Feyerick on Early Start this morning to weigh in on the progress.

Rep. Waters is also the Chief Deputy Minority Whip and serves on the Financial Services and Judiciary Committees.

Only 35 days remain until automatic tax increases and spending cuts kick in unless Congress is able to avert the fiscal cliff.

Politicians on both sides of the aisle have publicly shared willingness to compromise, but no deal is yet in sight. Some are saying that a deal that reduces the country’s debt will both improve the economy and create jobs.

Senior editor of "The Atlantic," Derek Thompson, disagrees with that assessment. Thompson is the author of "The Best Way to Think About Deficit Reduction: It's Not Stimulus, It's Insurance”, and he joins Zoraida Sambolin on Early Start live from Washington D.C. this morning. 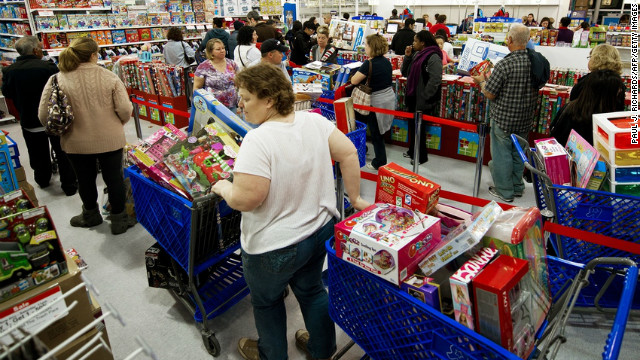 Send us your Storygraph: What 'must-get' gifts are your loved ones yearning for this season?

Are your kids begging Santa for that hot video game? Is your husband eyeing that surround sound system for Hannukah? With the holiday season just around the corner, we’re sure your must-get gift list for your loved ones is growing longer by the day.

We’d like to hear what folks are asking for this holiday season, and we're partnering with iReport to do it.

Upload a photo of your loved one (extra points if you include a photo of their letter to Santa!) and tell us about the gift they’re dying for. Please include the following information:

Your Name:
City, State:
Hot holiday gift:
Who it’s for:

CNN's Early Start with John Berman & Zoraida Sambolin and Starting Point with Soledad O'Brien will be featuring a selection of Storygraphs throughout the show. You could also be featured on CNN.com.

SUBMIT YOUR STORYGRAPH: What 'must-get' gifts are your loved ones yearning for this season?

BREAKING: gas drops below $4 a gallon for first time since March. (20% off the high)
Johnberman

11:20 am ET August 10, 2022 RETWEET
A batter got hit in the head. Instead of rushing the pitcher…he went and gave him a hug. Wonderful, wonderful stuftwitter.com/i/web/status/1…uPuz
Johnberman