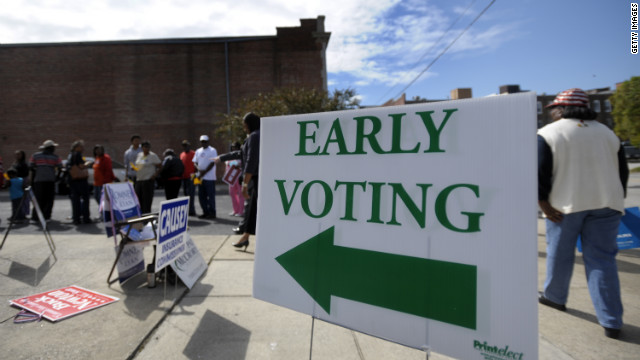 Calling all early voters: Share your 'Votergraph' with us!

During the 2012 presidential election, millions of voters will have the option to cast a ballot for their candidate much earlier than Election Day on Nov. 6th.

According to CNN.com reporting, voting experts estimate approximately 35% to 40% of eligible voters are expected to cast their vote before Election Day. That's 5% to 10% more than those who voted early in 2008. By some estimates, over 2 million votes for president may have already been cast.

To all those folks who have already voted or plan to vote before Nov. 6th, we want to hear from you.

We've partnered with iReport to try to gather a snapshot of what all these early voters look like, and what's most important to them in this election. We're calling it "Votergraphs." Check out the iReport "Votergraph" page here.

If you have voted early or plan to, go to the iReport "Votergraph" assignment page to upload a photo of yourself (at the polling place, with your ballot, or even with your family or at home...whatever you think showcases why you decided to vote early) and include the following information:

Name:
Age:
City, State:
Why you chose to vote early:
Who you voted for:
The biggest issue for you in this election:

Throughout the next two weeks, we're going to share your stories with our audience on "Early Start" and "Starting Point" to help the country get a good picture of how important early voters will be to shaping this election.

RT @Bootsy_Collins: This goes out to All the Precious Mother's around the World. Thx u for what you've done to bring us another step closer…
Johnberman

1:07 pm ET May 9, 2021 RETWEET
@SteveKornacki @joshgerstein Have investigators spoken to you yet? Do they track down everyone with an incentive?
Johnberman

12:19 pm ET May 9, 2021 RETWEET
@SteveKornacki @joshgerstein Do you still get credit for calling the winner?
Johnberman

12:19 pm ET May 9, 2021 RETWEET
Seriously? That is what I do every. single. day. Interplanetary drilling....that’s another mattertwitter.com/brianstelter/s…3L
Johnberman

7:54 am ET May 7, 2021 RETWEET
@brianstelter @brikeilarcnn @gfellows66 I am judging you for this, Brian.
Johnberman