Poppy Harlow looks at how Chrysler was able to quadruple their profits in the first quarter.

Colo. student Madalyn Starkey on photo with her and President Obama going viral

Madalyn Starkey, a student who had her picture taken with President Obama, on the response since she posted the photo.

Doug Oberhelman, CEO of Caterpillar, talks with Poppy Harlow on the uncertainty of U.S. recovery in an election year.

There's new hope in the case of little Madeleine McCann, who has been missing for five years. She disappeared during a family vacation in Portugal when she was just a toddler. Now, Scotland Yard is saying they have reason to believe she could still be alive.

British police released a composite photo of what Madeleine might look like today. She would turn 9 next week. The lead British investigator is asking Portuguese police to re-open the case.

This morning, McCann family friend and spokesperson Clarence Mitchell talks with Ashleigh Banfield on "Early Start" where he explains the 'mammoth' amount of information investigators are reviewing in an effort to find Madeleine. He says it's a combination of new and old leads that have led to renewed interest in the case.

"There are 195 potential leads, or investigative opportunities as the police like to call them, contained within historic file. That's something like 40,000 pieces of information - 100,000 pages. It's a mammoth task police have to go through," he says.

"Police are saying these 200 leads are historic, and there's new information that they won't specify," Mitchell adds. He explains the British investigators are organizing all this information to turn over to Portuguese police to reopen the investigation.

In this second video, Mitchell explains that the McCann family is no longer under suspicion and is working fervently with police to find their daughter. 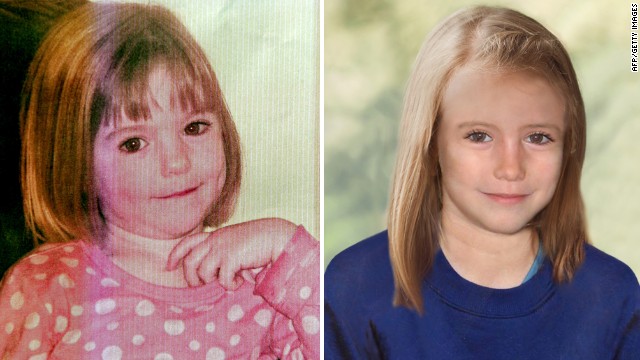 UK police think Madeleine McCann may still be alive. A photo of McCann when she was 3 (left) combined with a photo of how police think she might look today (right).
April 25th, 2012
05:59 PM ET

The Worm: What's lined up for Thursday, April 26th – travel for beautiful people, the search for Madeleine McCann and a Marine discharged for Facebook comments

As the saying goes, it's what the early bird catches. With "Early Start" revving up for a 5aET start, here's a sneak peek at what we have lined up for tomorrow's show.

* "Are you attractive but you don't have the money to travel?" That's the question posed by MissTravel, a new website that aims to help the genetically blessed find someone to bankroll their trips around the world. Brandon Wade, Founder and CEO of Misstravel.com, will be live on "Early Start" at 6:30amET to explain the concept and

* People were shocked with the news overnight that British investigators believe Madeleine McCann, who vanished during a 2007 family vacation in Portugal, may still be alive. Clarence Mitchell, spokesman for the McCann family, will be live at

* A Marine who used his Facebook page to criticize President Barack Obama has been discharged, a Marine Corps spokesman said Wednesday. Chris Lawrence will be live with the latest on the story.

Plus we've got all the late night show highlights and trending stories that you missed while you were sleeping. Watch "Early Start with Ashleigh and Zoraida" live Thursday starting at 5am Eastern on CNN.

Today, the law that put Arizona in the immigration-enforcement business heads to the high court.

The courts say the state's "interference" is making matters worse. Arizona says the issue is safety and the federal government isn't doing enough. And it appears many people agree. A new poll finds 68% of people nationwide support the law, just over a quarter disapprove.

Former Rep. David Schweikert (R-Ariz.) talks with Zoraida on the case before the Supreme Court.

CNN's Elizabeth Cohen on the first mad cow case in the U.S. in six years, and whether consumers should be concerned.

Apparently the "Early Start" team is familiar with bear encounters. In the video below, Ashleigh shares a story of when a bear invaded her home in Canada.

Poppy Harlow looks at how Apple was able to double its profits in the second quarter due to strong iPhone sales.

JUST NOW: "They proceeded to walk out after that picture... sending a clear message they do not support Ukraine."â€twitter.com/i/web/status/1â€¦o9
Johnberman

7:52 am ET May 23, 2022 RETWEET
JUST NOW: ""I personally kind of like it because it does provide a deterrent message, that we will defend Taiwan...â€twitter.com/i/web/status/1â€¦H8
Johnberman

9:44 am ET May 18, 2022 RETWEET
RT @noraneus: Weâ€™re stunned by this incredible blurb fro@JamiesonVnV for MUHAMMAD NAJEM, WAR REPORTER! Her book, When Stars Are Scattered,â€¦
Johnberman